Where the River Runs Deep 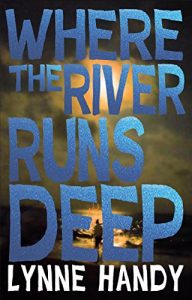 Distraught over her partner’s betrayal, poet Maria Pell, no stranger to paranormal phenomena, flees to Cherapee, a small coastal town in North Carolina, to participate in a writers’ retreat. She brings verses written by a deceased local poet, intending to find the woman who inspired them. Her writer friend, Bo Bennett has also signed on to teach at the retreat. Researching a history of the Creighton family, he discovers someone is killing descendants of Old Peter Creighton, a seventeenth century slave-owner. Are the murders retribution for past sins or do they provide cover for something sinister that’s more immediate? Racial tensions seethe in the barrier island community where river mists and blind reverence for old traditions hide secrets of the living and the dead. The poems and Bo’s findings solve old mysteries and forever change the way in which people regard themselves and each other in Cherapee County.

Where the River Runs Deep: “Singing. An out-of-tune piano. The houseboat passed by…Surreal. An old hymn offering the promise of heaven. The saved gliding by on an ark. Two sinners locked in an embrace…”

Praise for Where the River Runs Deep

Where the River Runs Deep is a short, easy read that will appeal to those who enjoy a good murder mystery, with a dollop of romance and paranormal activity thrown in for good measure. Author Lynne Handy has done a fine job creating a lead character in Maria Pell who is strong, independent, and successful yet still vulnerable enough to be seeking love and romance, now that her relationship with Mathieu has gone sour. What the author does so well is to expose the underlying racism and hatred that is sometimes taught to young southerners at their parents’ feet. She does an exceptional job of exposing the reality that not a lot has actually changed in the intervening years since slavery was an accepted part of southern life. Although on the surface, race relations may not seem as big a deal as they were in slavery days, it is clear that if you scratch the surface of the veneer of equality, you will find minds still rooted in the idea that somehow African-American equates to something “less than”. I particularly appreciated that the author beautifully used the vehicle of poetry to convey this deep-seated weight of injustice that so many people of color felt. The author’s fulsome and descriptive passages, setting the scenes of the forests and sea that surround the North Carolina Outer Bank, certainly allow the reader to feel part of this often foreboding atmosphere. I thoroughly enjoyed this read and can highly recommend it. Read the full review here.

Self-Publishing Review, ★★★★½ “A probing novel with a touch of the paranormal, Where the River Runs Deep by Lynne Handy is a stunning story of violent truths clashing with long-hidden hate, exposing the scarred soul of America, both past and present. Maria is a striking protagonist, blending her deep belief in people, a love of poetry, and a freshly damaged heart. As she digs into the mysteries hidden in the death of her brilliant student, and the lost-in-time town she’s temporarily calling home, Maria finds far more visceral terrors on the outer banks of North Carolina. Handy has a quick and unpredictable style to her prose, painting vivid descriptions with slashes of clever language, and effortlessly building tension in critical scenes, making this a mystery that should not be missed.”

“For the reader who appreciates the complexities of a solid, traditional murder mystery, master mystery writer Lynne Handy should be your new favorite author. In Where the River Runs Deep Handy carefully sets up her protagonist Maria Pell as she attends a writers retreat in a small coastal town of Cherapee, North Carolina. Coincidentally Maria brings verses written by a deceased local poet to see if she can discover the origins of the brilliant writings. What Maria uncovers there are racial tensions, a disturbing local family history, on-site murders, including a colleague’s death and also, romance. As in all of Handy’s stories, this is another page turner that takes the reader through as many twists and turns as a local Carolina hurricane. This volume is part of the Maria Pell Mystery Series. Be sure to read them all. You won’t be disappointed. Handy’s writing is mesmerizing and this edition, as all within the series, offers that satisfying surprise element at the end. Once you begin, you won’t stop reading until the last chapter. Be sure to have ordered the next Lynne Handy mystery beforehand as you’ll want to jump into the next brilliant mystery setting without delay.”   – L.A. Scheer, Media Goddess/Writing Mentor

“A good tale laced with murder, race relations, romance, treachery and everything you’d want in fewer than 200 pages. After reading her other works it is clear the author has a gift for multi-generational dynamics. Nothing is out of bounds here. Race relations is tackled head on. The elegant prose provides a peek behind the curtain into the southern mindset. Pick this up – you won’t regret it.”

“There is a great deal to like about this book, but the author’s articulate and expressive writing style was by far my favorite element. Told in the first person perspective, the author quickly creates an emotional connection between Maria, the narrator, and the reader. Although there are a few mysteries surrounding the murder of various subjects, the main mystery of this story involves Cherapee and its unpleasant history. The murder mysteries supplement the mystery involving Cherokee, making for a complex and dramatic climax. Where the River Runs Deep proved to be engaging, emotional and thought provoking. My only complaint is that I wish I could have spent more time with Maria and her poetic narrative.”

“Where the River Runs Deep is many things. Lynne Handy has packed a steamer trunk of action and intrigue into this slim volume, which is equal parts mystery, romance, thriller and parable. She has spun quite a yarn, stout twine interspersed with gossamer. The lively adventures of Maria Pell in the North Carolina backwater are punctuated by poetry that is sometimes achingly lovely and often just plain ingenious. The story is a study in contrasts – paranormal activity juxtaposed with humans at their earthiest, academic pursuits playing out alongside ignorance and superstition, history explored with the help of a GPS and a laptop. It is also a story of racial conflict and the righting of ancient wrongs. It is ultimately a testament to the human spirit and its ability to survive the unimaginable with grace and valor. We learn to respect the resilient and intrepid Maria, and the ending leaves us wishing we could travel with her on the next leg of what is bound to be another grand adventure.”