Spy Car and Other Poems 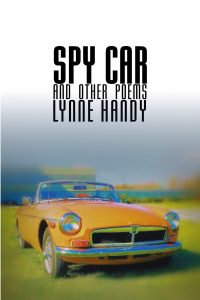 Spy Car and Other Poems is Lynne Handy’s debut chapbook. The locales of her poetry are far-ranging, from an excavation site in Greece to a modern city street where she finds Tupac’s rose thrusting through the concrete. In her work, she embodies the hard-headed realism of her Yankee forebears, but also digs into southern roots to bring forth mystery and longing. The poet’s love for history is reflected in many of her verses. Some poems are brazenly personal, revealing harsh secrets. Spy Car is a journey for the adventurous.

Eve in Bosch’s The Garden of Earthly Delights

“A murky pool beckons, a way to grow aslant with knowledge seeded, to be a fish with wings, a bird with three heads, a missile piercing the sky with its beak. I howl at the moon like a crocoboon.”

Praise for Spy Car and Other Poems:

If poetry is a car, this debut collection hums and purrs like an expertly tuned machine.

A book that takes old words, spruces them up, and puts them out on the highway again. (KIRKUS)

Good poetry is about pressure—how much force one can pack into, and wring from, the fewest words—and it’s clear from the get-go that Handy is fully aware of the nature of that struggle. One can hear it in “Something Like a Sonnet for Lucie Brock-Broido,” when she writes, “she lifts her pen to torque / A primer for divining spells.” Much can be divined from the poet’s choice of the verb “torque.” Another author might have opted for the more conventional word “write.” Torque, by contrast, is rotational force: the power that carries an object around a fixed point, and with this simple word, Handy gives readers a whole picture—of pen pressed down to page on the fulcrum of a poet’s knuckle. Poetry, she seems to say, is pressure and, thus, work. Her verse is chock full of such little joys, of words and phrases that, when pressed, give way to images, stories, and worlds. A high point is the title poem, in which the speaker marvels at her grandson’s rehabilitation of an old sports car: “he replaced / the brakes, ignition, clutch hydraulics, / pumps, belts, hoses, and the choke. / Its bracken chassis overhauled, / the vintage MGB positively preened.” Later, the young mechanic takes her on a ride, and they sweep “along Illinois highways, / eyes riveted through a shared windshield.” To her credit, Handy doesn’t romanticize the relationship between grandmother and grandchild, but she does show what they hold in common: the clear windshield, the road, or perhaps the work. This is a book about rehabilitating language, and readers are sure to enjoy the ride.