In the Time of Peacocks 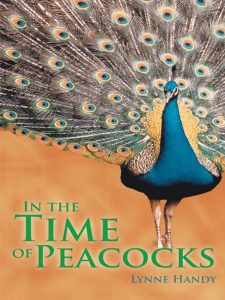 It is 1949 in a seaside town in Mexico, and Caterina lives happily as a cherished daughter of a wealthy family. She has only one worry: she has no early memories of her childhood. Increasingly, strange images drift into her mind—a gazebo, a farm, a blonde woman. She has no idea that she is really someone named Cate Miller, who was kidnapped from her Indiana farm family ten years earlier. In her fifteenth year, her life changes again. This time she will remember the past.

Cate survives an automobile accident in California that kills her Mexican parents. The police uncover her true identity and return her to her biological family, who gave her up for dead years ago. Against a backdrop of social change, Cate, who is tied to both the past and the present, struggles to achieve her dreams. A Catholic, she believes in the tenets of her faith with childlike obedience—but as she learns more of life, she finds a less orthodox route to the divine through the poems of Federico García Lorca.

“…Caterina had a troubling dream: the salon was aflame, and a beautiful white horse tethered to a column, was slamming its hooves against the wall. Ignoring the horse, a small girl with golden curls took photographs, one by one, from a red-leather album and fed them to the fire, which licked them with a fierce red tongue…”

Praise for In the Time of Peacocks:

A great read! This is an epic, sweeping story that sneaks up on you. It traces a complex life in a not simple era. The themes are courageous   – race, religion, guilt, loss, longing, fate, family dynamics and cultural differences. The story leaves you in a way you may not expect. (CH)

A new life! Handy has written an attention-grabbing book…The story spans two countries, Mexico and the United States, and several generations. We follow Catarina Montserrat y Vega as she survives a devastating automobile accident that kills her parents. Her recovery unravels an old mystery …(KB)

I devoured this book!  About 50 pages into the nearly 500 page book…our little 15 year old Mexican protagonist finds her world turned completely upside down.  Curious about the lack of baby pictures and her family’s strange answers when she has questions about childhood memories, she isn’t hugely shocked when she discovers she is NOT the daughter of a wealthy coastal Mexican family. She is returned to her “real” family and realizes her world was previously turned upside down when she was five years old and abducted away from her bland Indiana farm family. Here she is in a 1950’s Midwestern farm community. Passionately Catholic. Lively and curious, plus affectionate, well-read, and in love with the poetry of her literary hero, Federico Garcia Lorca. Yet her new…family seems stingy in their affection…Who are these people? Where are her roots? (CR)